TrendyIdeas.net | Your number one source for daily Trending Ideas
Home Design Sumy – photo, description, cultivation and care, use in the garden 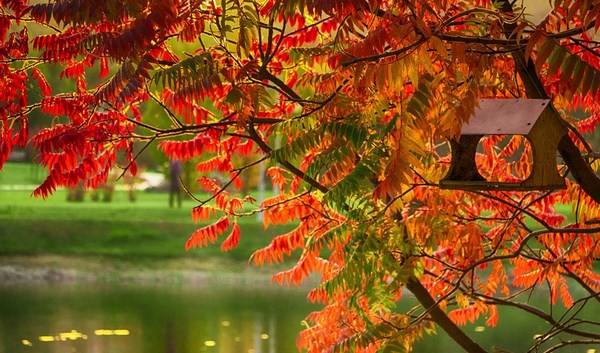 If you have never met this bright, spectacular tree, autumn is the time to get to know it. Before you fluffy sumac, or deer-horned (Rhus typhina) – one of the main favorites of the autumn garden. What kind of plant it is, where it came from and how to grow it in your garden, we tell in the article.

Bright, blazing crimson foliage is the main decoration of the deer-horned sumach

Deer-horned sumac (R. typhina) belongs to the sumach family and is a low multi-stemmed tree or shrub. In nature, it grows up to 10–12 m in height. Garden forms rarely exceed 4-6 m.

The homeland of the plant is the eastern parts of North America, where it grows in abundance on the dry edges of deciduous forests, roadsides, and low mountain slopes. Sumy came to Europe at the beginning of the 17th century and gardeners immediately liked its unusual appearance.

In spring, the plant expels thick shoots covered with a delicate brown-gray down. They resemble young deer horns – hence its specific name “deer-horned”. 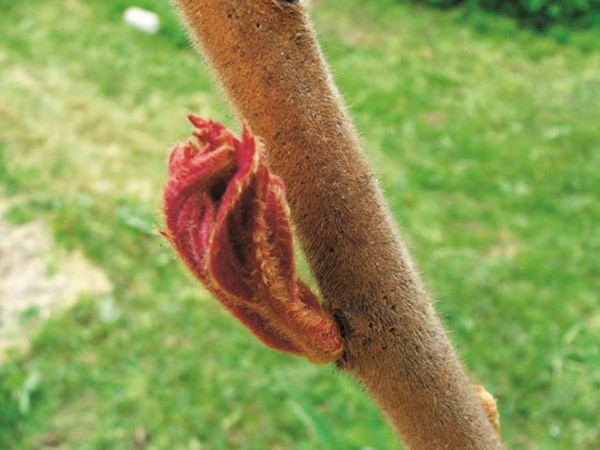 Young shoots of sumach – soft and fluffy, like deer antlers

Large odd-pinnate compound leaves of sumach reach a length of 50-60 cm and resemble frond palms or ferns. Each leaf consists of long, serrated leaves with a dark green velvety surface (from 11 to 31). The peak of the decorativeness of the shrub is in autumn, when the leaves acquire a stunning crimson color and seem to glow from the inside. Moreover, before turning red, the foliage changes the entire palette of shades – from golden yellow to fiery scarlet. 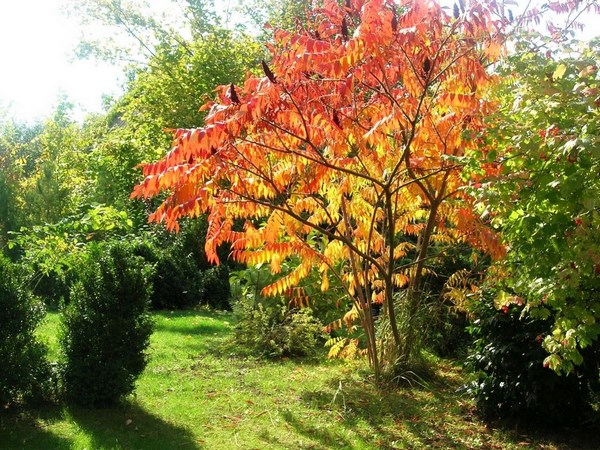 Sumach bush in the autumn garden looks like a flaming bonfire

Sumach flowers are no less original. In June, thick red candles 15–20 cm high appear on the tops of the shoots, consisting of many small flowers, exuding a fresh cucumber-vinegar aroma. For this smell, sumac got its second name – vinegar tree. 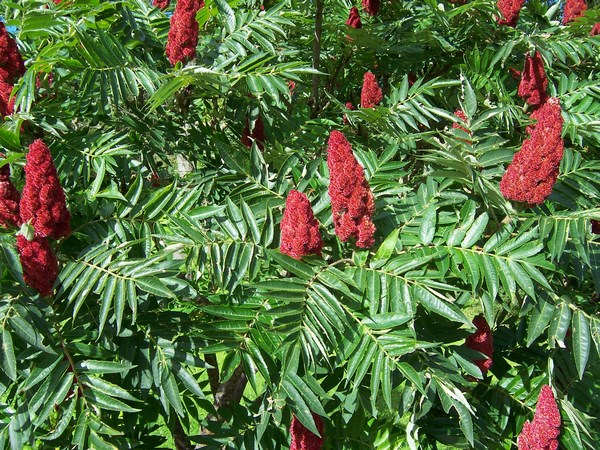 In place of the candles, over time, dense clusters of berries form, decorating the crown until winter

Sumakh is a plant with dioecious polygamy. This means that it forms female and male flowers separately. The first are the same candles that turn into clusters of red berries, the second are loose yellowish-green inflorescences necessary for pollination. On one tree, they are not found in their pure form, but the plant can form hermaphrodite (bisexual) flowers.

The fruit of the vinegar tree is edible. In the United States, they are still used to make homemade soft drinks that taste like lemonade. But most often the berries are left on the tree – as a winter decoration and a treat for birds. 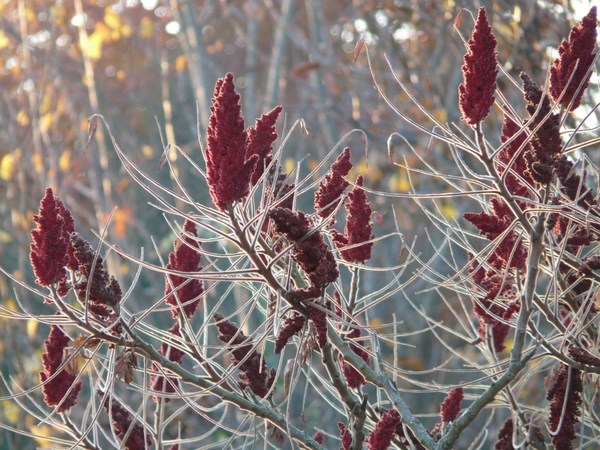 Thanks to dense panicles with red berries, even in winter, sumac looks decorative

How to plant sumac

Autumn is the best time to plant a decorative tree.

It is advisable for him to choose a place in the garden that is sunny, sheltered from the wind, with well-drained soil, since he does not accept root trapping. Sumac is a true Spartan in other growing conditions. It will grow both on fertile loams and on poor sandy or stony soils, an alkaline and slightly acidic environment is suitable for it, it is resistant to diseases and pests, easily tolerates heat, drought, and frosty winters. And if it freezes, it always recovers.

When planting, you need to consider two important features of the plant.

When planting in the fall, it is advisable to insulate the root zone with fallen leaves, spruce branches, so that the plant is guaranteed to overwinter and begin. 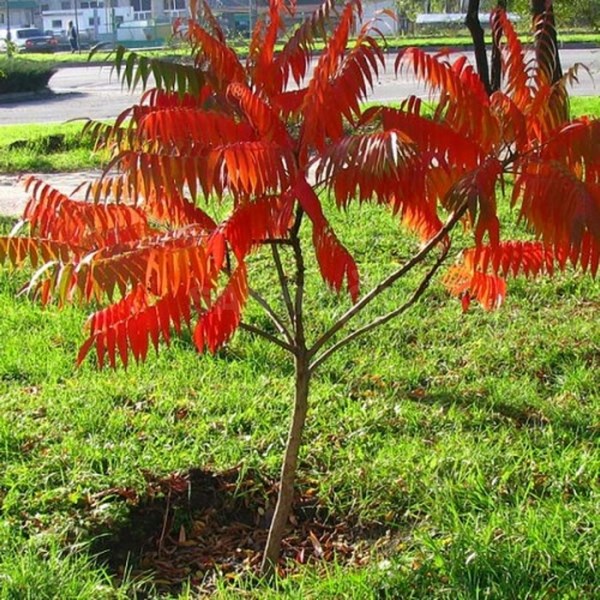 Another great thing about vinegar is that it requires little or no maintenance.

Water it only in case of extreme heat and prolonged drought. The plant also does not need feeding. Although, if you see that the growth is insufficient, in the spring you can pour humus or plant compost into the ground around the trunk. This will give the tree a good start.

Sumac does not require annual pruning, although it is not afraid of it, since it grows quickly. Usually in the spring they carry out sanitary cleaning of the crown, removing frozen branches. And they also form a plant by shortening too protruding shoots.

Due to its high plasticity, the vinegar tree can be grown on a trunk, formed in the form of a multi-stem tree, a shrub.

Since the plant is prone to overgrowth formation, it is not recommended to loosen the soil in the root zone. By damaging the roots, you stimulate the emergence of young trees. By the way, the same can be said about excessive feeding. The better you take care of the tree, the more abundant the growth will be.

In order not to loosen the soil, it is best to turf or mulch the root zone with decorative gravel. If shoots appear and need to be removed, cut off the shoots at the level with the soil, but do not dig them out, otherwise you will get several instead of one tree. 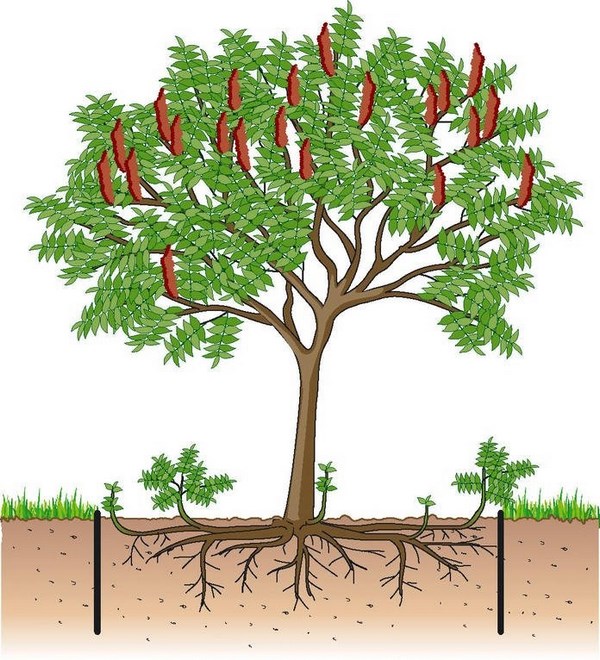 How to propagate sumac

The vinegar tree belongs to a group of so-called walking plants. This means that the main way of its reproduction is by root shoots. The offspring that appeared in the spring forms its own root system by the fall. It can be safely separated from the mother plant and transplanted.

How to use in landscaping

The deer-horned sumac looks most advantageous in single plantings. A low tree or shrub with large exotic leaves and bizarrely curved stems can be planted on the lawn in front of the house, in the patio, against the background of an evergreen hedge of coniferous plants. 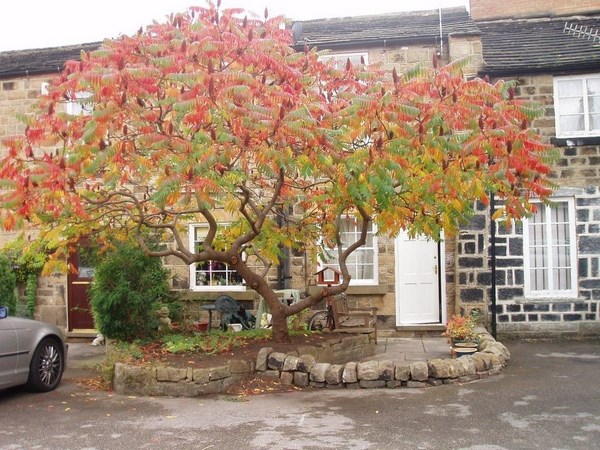 Reindeer sumac in the landscape design of the city courtyard

Several plants planted by a group also look beautiful. In this case, you can also count on a generous berry harvest. 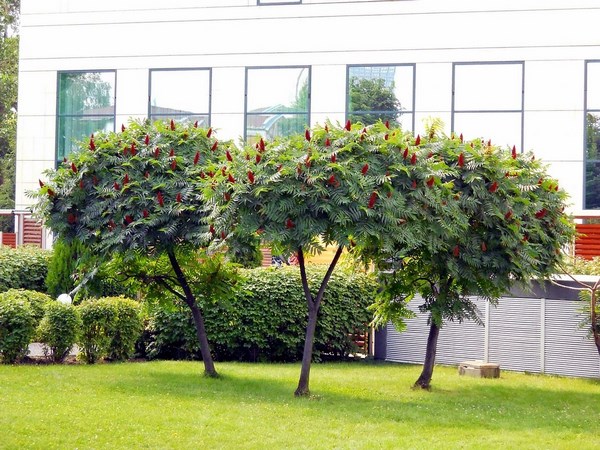 Three sumacs on the lawn make up a very picturesque group

You can combine the vinegar tree with other garden trees, shrubs, perennials. 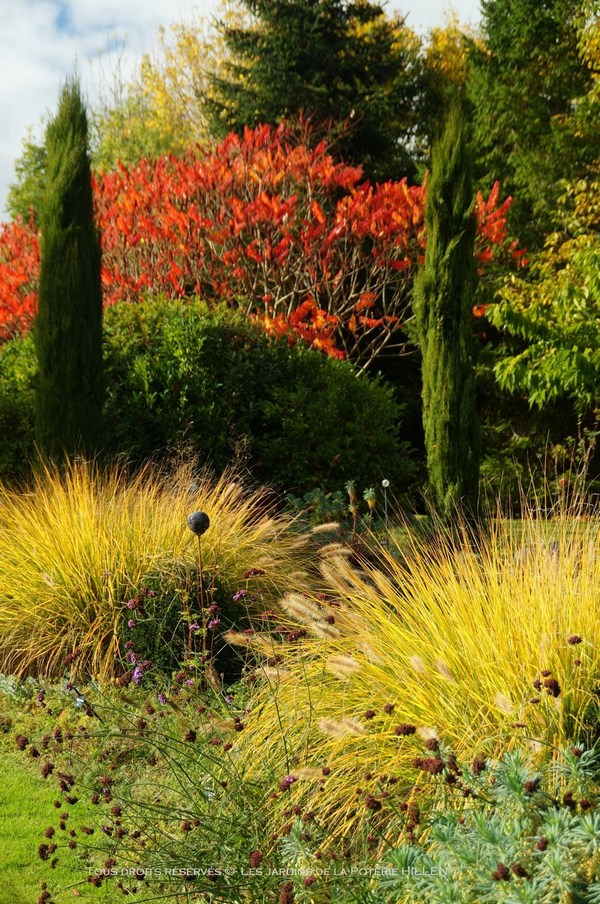 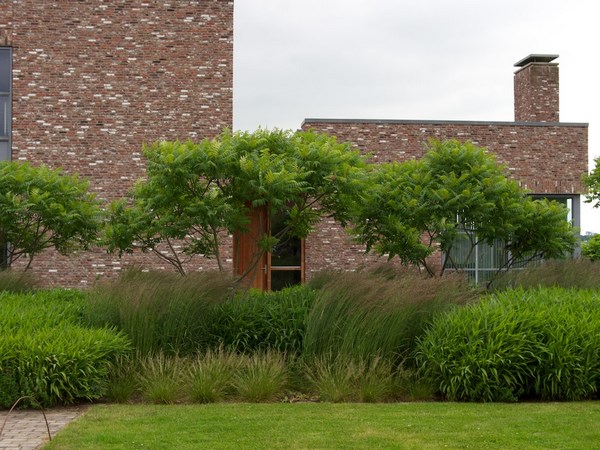 Due to the rapid growth of creeping rhizomes, sumac is used to stabilize the soil by planting it on slopes. The plant also looks organic on an alpine slide, where it can successfully replace another favorite of the autumn garden – Japanese maple. 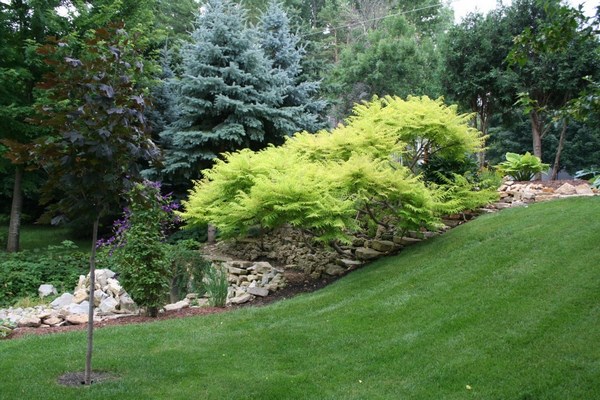 Stony slopes are closest to the natural habitat of sumac

In addition to the species Rhus typhina, several decorative forms of this plant are grown in the gardens.

Noteworthy is the vinegar tree Rhus typhina laciniata with serrated leaves. In autumn, it turns red, orange, gold, but the rest of the warm season looks decorative – deeply dissected foliage gives the shrub the appearance of a tree fern. 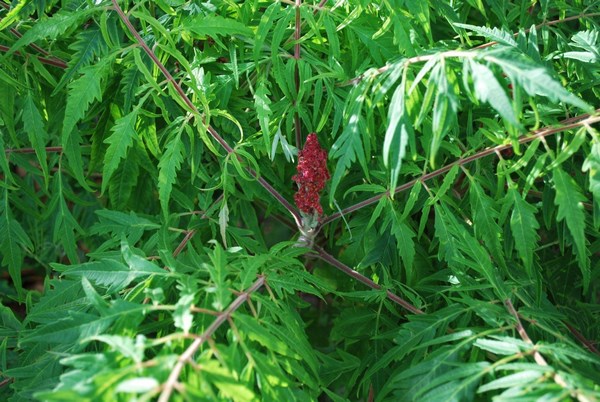 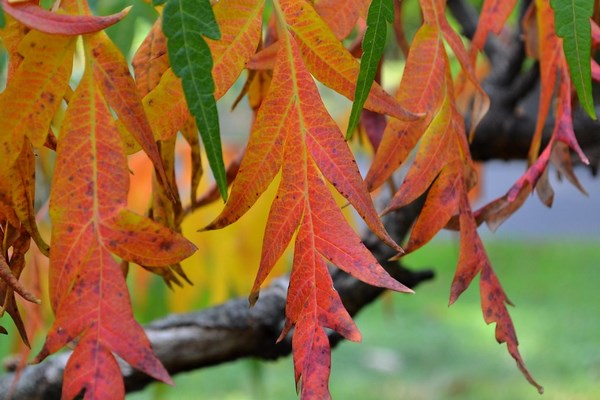 No less interesting and variegated variety with yellow-green leaves Tiger Eyes (“tiger’s eye”). It is more capricious: it loves warmth, it grows slowly, it can burn in the bright sun – therefore it is better to plant it in partial shade. In the spring and summer, the foliage retains its chartreuse color, and in the fall it turns bright orange. 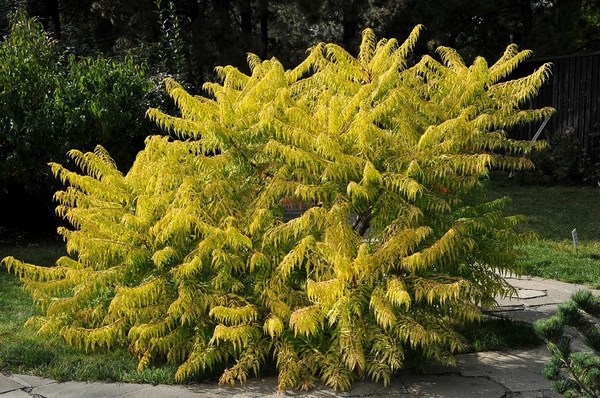 If you are interested in this plant, it is not too late to plant it. Young seedlings take root well after the autumn planting and in spring they will delight you with fluffy “deer horns”. And by the fall, a real fire of yellow, red and orange leaves will blaze in your garden.

Video on how to plant sumac