TrendyIdeas.net | Your number one source for daily Trending Ideas
Home Design Fungal diseases of boxwood – symptoms, reasons, how to fight 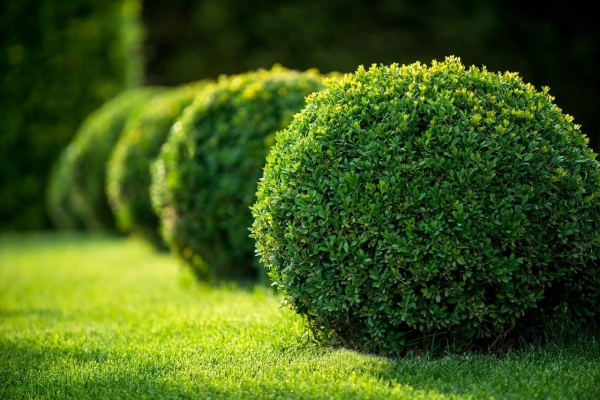 The dense and dense crown is the main decoration of the boxwood. But it is also the cause of a number of fungal diseases of the plant. Due to poor air circulation inside the bush, an environment appears favorable for the reproduction of pathogenic fungi. Today we will tell you how to deal with two of the most common and dangerous fungal infections that affect evergreen shrubs.

They say that with regular and correct pruning, the crown of the boxwood is so dense that it can withstand the weight of a brick.

In early spring, you may notice that some of the branches or even entire boxwood bushes are not growing or are growing more slowly than other specimens. If young leaves do not unfold at the same time, but remain pressed to the stem and gradually turn yellow, this is the first alarm bell. Chances are, your plants have fallen prey to the Volutella buxi fungus.

As the disease progresses, infected shoots change leaf color from straw-yellow to brown. On the stems and on the back of the leaves, traces of the fruiting of the fungus are visible – small convex wax points (pustules) at the beginning of their development are white, and later pink. 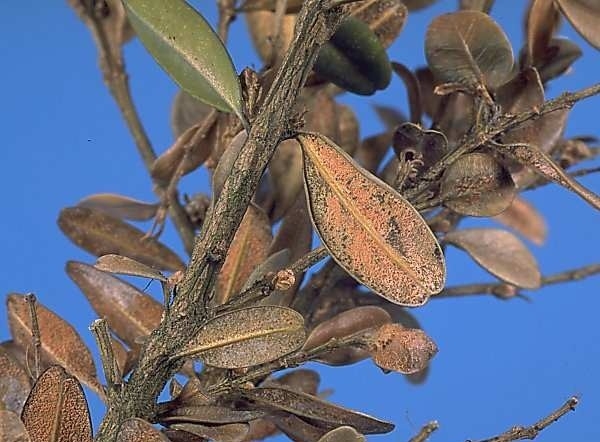 Over time, leaves and a branch die off. Having carefully examined it, you can see that the bark on the shoot has become loose, stratified, the wood is discolored.

Volutella buxi most often it affects too dense bushes with old foliage accumulated inside. Although boxwood is an evergreen shrub, its leaves are not eternal. They are renewed every three years, and if the crown is not cleaned, some of the fallen leaves accumulate inside. Gradually, it overheats and rots at high humidity. Add stagnant air due to insufficient ventilation of the crown and you have an ideal environment for the development of fungus. In addition, the likelihood of the fungus affecting weakened or diseased bushes is quite high, since they do not have enough internal reserves to resist infection.

Infection occurs through various kinds of wounds and damage to the bark of the branches, as well as through the places of cuts after shearing. First of all, young branches of the bush are exposed to infection. Weather conditions and the site of boxwood planting also play a role in the spread of the fungus – high air humidity, abundant rain, constant shade – all these factors contribute to the development of the fungus Volutella buxi.

Volutella buxi is a fungus that primarily affects young growth

How to deal with Volutella buxi

Trying to revive infected shoots by spraying them with fungicides is a waste of time. Chemistry is powerless against this fungus.

All dead branches must be cut and burned, and the bush must be thoroughly cleaned from the remnants of old foliage in the crown and in the root zone, since the fungus hibernates in the fallen leaves and in the spring, re-infection can occur. After that, the plant must be treated with a copper-based fungicide solution (“ HOM “,” Kuproksat “,” Abiga-Peak “, Nufarm). The treatment should be repeated after 7-14 days, and then after the next haircut before the start of the growth of young shoots. You need to spray not only the plant, but also the soil around the bush.

Thin boxwood bushes from time to time to prevent stem necrosis. Do not cut, but thin out, removing branches growing inward. In addition, in spring and autumn, you need to clean the shrub from fallen leaves and plant debris.

Treat the bushes that have recovered in the spring before the new growth begins with a Bordeaux mixture or copper-based fungicides.

The withering away of boxwood branches

An even more dangerous enemy of boxwood is the fungal pathogen Calonectria pseudonaviculata (synonym – Cylindrocladium pseudonaviculatum), which causes boxwood leaves to fall off and whole branches die off. This disease is especially susceptible to Boxwood evergreen ‘Suffruticosa’ (Buxus sempervirens ‘Suffruticosa’). According to observations, this disease spreads very quickly in wet weather and temperatures from 24 ° C.

The next symptom is dark, almost black stripes 1-2 cm long on the stems of the affected branches. These stripes appear first in the lower part of the affected branches, gradually moving upward towards the tips of the stem. Dark brown or black streaks on the stems are a symptom that distinguishes this type of boxwood rot from other fungal infections. 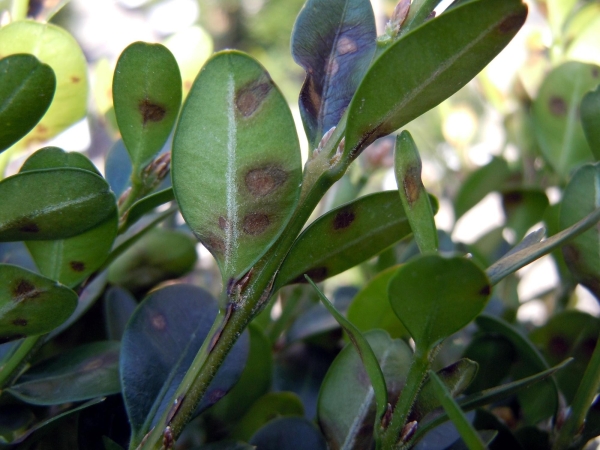 Early Symptoms of Boxwood Infestation with the Fungus Calonectria pseudonaviculata

Later, the leaves dry out, repainting in a beige-brown color and fall off.

The disease most often does not affect the root system, so an adult and strong plant can give a new growth for some time, but the disease quickly spreads to the entire bush and takes on severe forms. Eventually, the boxwood dies. 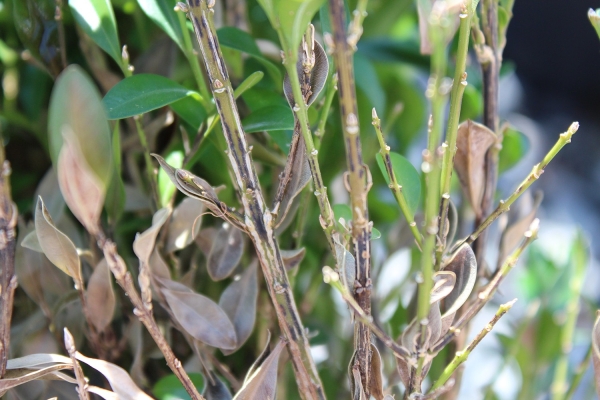 It looks like a plant affected by a fungus in the later stages of the disease.

Just like Volutella buxi, the fungus Calonectria pseudonaviculata infects plants during the warm season with high humidity and frequent rains. For the penetration of the fungus, it is enough for the boxwood leaves to be wet for only 4-6 hours.

Also, the cause of infection can be an infection brought in from the outside, for example, with new plants of boxwood or pachisandra, which also suffers from this disease.

Reinfection of recovered bushes can be caused by fungal spores remaining in plant debris and soil. The pathogen shows an enviable vitality and remains viable for at least 4 years.

Damaged and suspect shoots should be trimmed and burned outside the garden. It is also important to collect fallen leaves, clean out plant debris from the crown, remove the top layer of soil (about 5 cm) under the infected bushes.

After that, treat diseased plants and nearby healthy bushes with a fungicide based on the active ingredient Difenoconazole (“Raek”, “Skor”, “Chistotsvet”, “Discor”, “Medea”). Repeat spraying after 7-14 days.

Plants that have completely shed their leaves must be dug up and burned. It is possible to plant a new boxwood bush in this place only after complete disinfection of the soil, and even better – replacing it.

Minimize watering of damaged plants and avoid overhead irrigation, water only at the root. Jets of water will blow the spores around the area and infect healthy boxwood bushes.

Grow boxwood in well-drained soil to prevent disease. Plant in rows so that air can circulate between the plants. Thin and clean the bushes of dead leaves and twigs regularly.

Forewarned is forearmed. Proper planting and maintenance of plants will minimize the risk of disease in boxwood bushes. But even if this happens, timely detection of the infection will nip it in the bud.