TrendyIdeas.net | Your number one source for daily Trending Ideas
Home Design a step-by-step description of how to build a house from ice bricks... 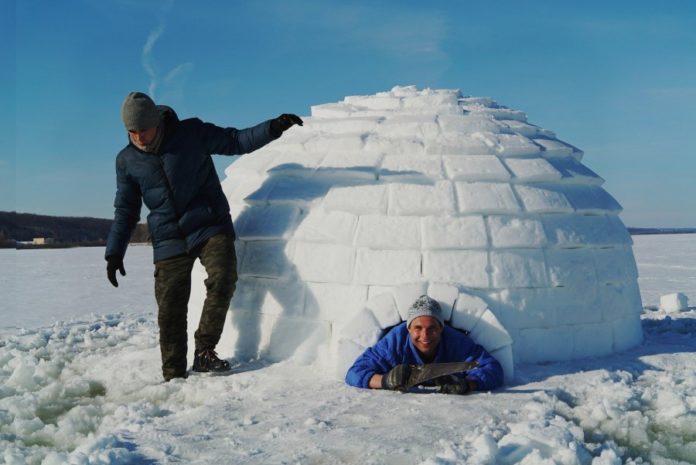 The house of the Eskimos, which is called igloo, is a unique type of winter houses, in which, even with incredible frosts, it is quite warm. And they are used not only by the peoples of the Far North. On a winter hike or just for the entertainment of a child, you cannot do without such a house. But how to make an igloo out of snow with your own hands and not be mistaken? Read in our article! 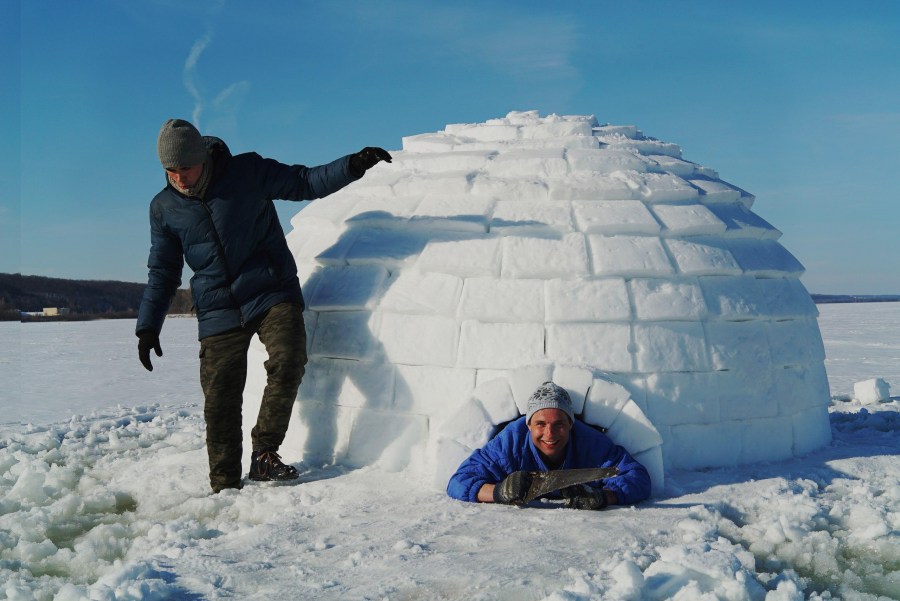 Preparing to build an igloo

Let’s start by finding a suitable location. Lucky if there is a suitable slope. This will reduce the amount of work because the walls will be shorter. This is especially useful if the house needs to be built in the forest before sunset. 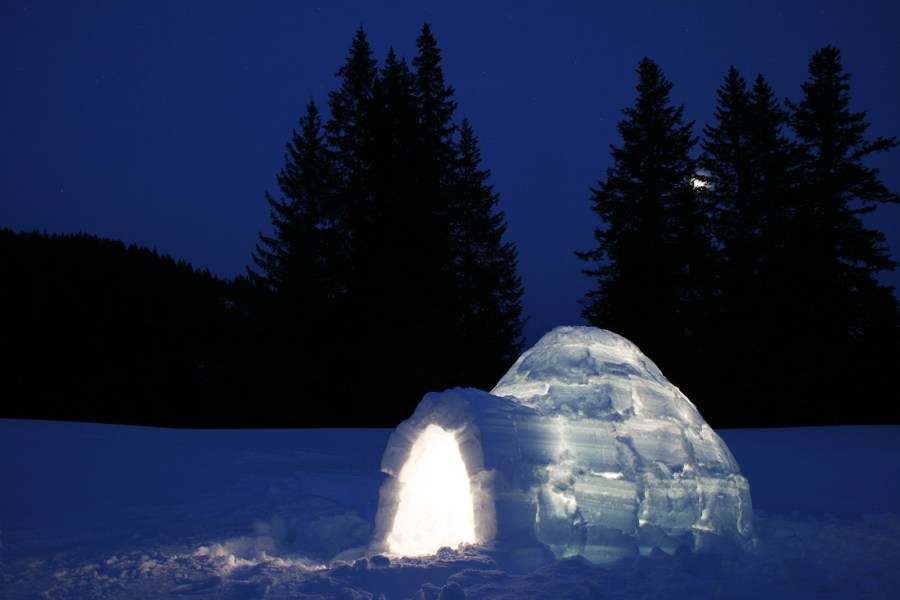 Regarding the choice of location, 2 more rules must be followed:

Now we are looking for material for the blocks. It shouldn’t be loose, again to save time. It only seems voluminous, in fact there are many voids in it and it will take too much to form the material. 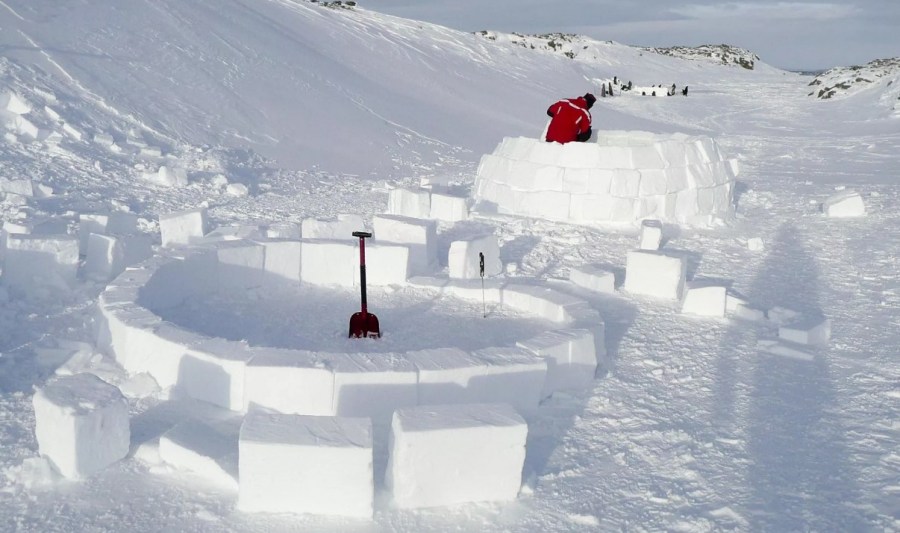 Again, checking the tightness is easy – push against it with a stick and if it goes with difficulty, it suits us. By the way, for the construction we need snowdrifts of at least 60 centimeters.

Sometimes there is simply no dense snow and you have to build an igloo out of what is. Snow will need to be thrown on top and tamped down with boots until it is compacted to the desired state.

It’s time to outline a circle in the snow. To do this, define the middle and draw a circle with the heel of the boot. It is important to make it as round as possible. An irregular shape will be unstable, after all, the shape of the dome was chosen for a reason.

The diameter should be such that you can lie comfortably, but not more than 3 meters. Without precision, it will fold under its own weight.

Cut out the blocks inside the circle and take them out. We will build a snow house from the center outward. 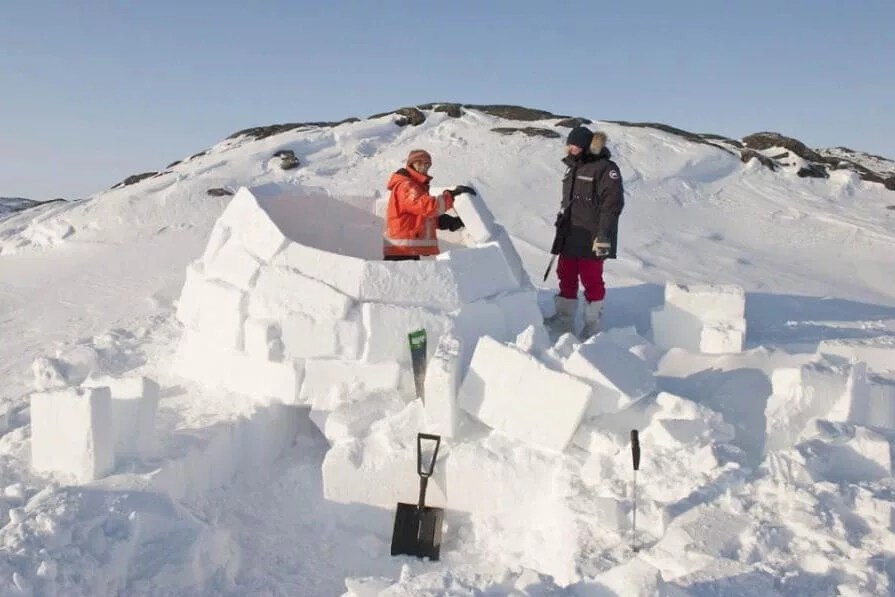 Now we need a snow saw. If not, you will have to use a regular stick. First, cut a long trench in the center. It must be cut in such a way that one of the ends rests directly on the outlined circle. At the intersection, we will make an entrance further. If you are building on a slope, then it should go from top to bottom. 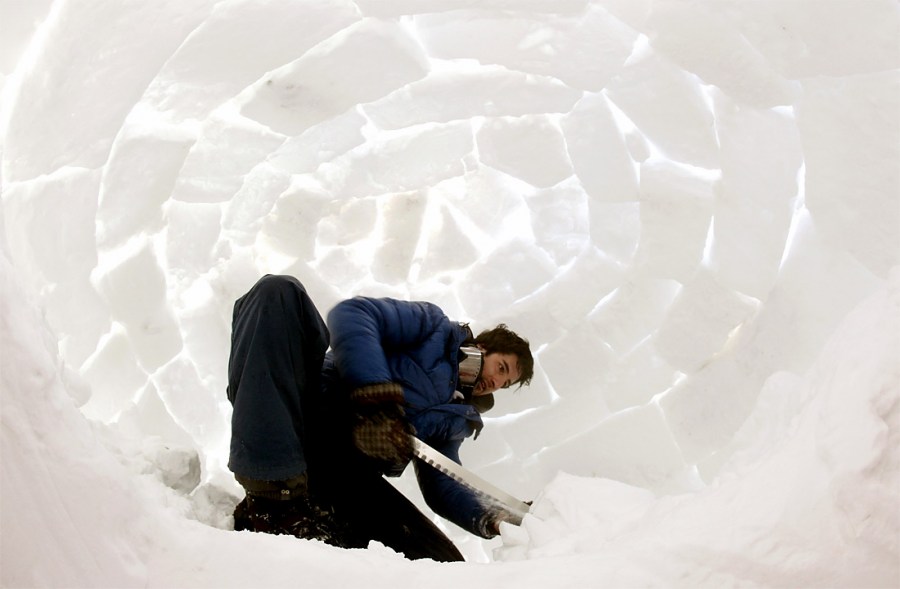 This completes the preparatory work. We will now look at how to build snow structures.

Erection of walls and domes

Cut out blocks inside the trench. Usually their size should be 90x38x20. We cut it out with an ordinary snow saw or machete. We just need to lay out the bottom row as shown in the picture. By the way, a snow house for children can be made faster from a pre-prepared form, which is made from boards, plywood or ready-made boxes. At the junction, it is advisable to level them with a knife or saw so that the fit is maximum. 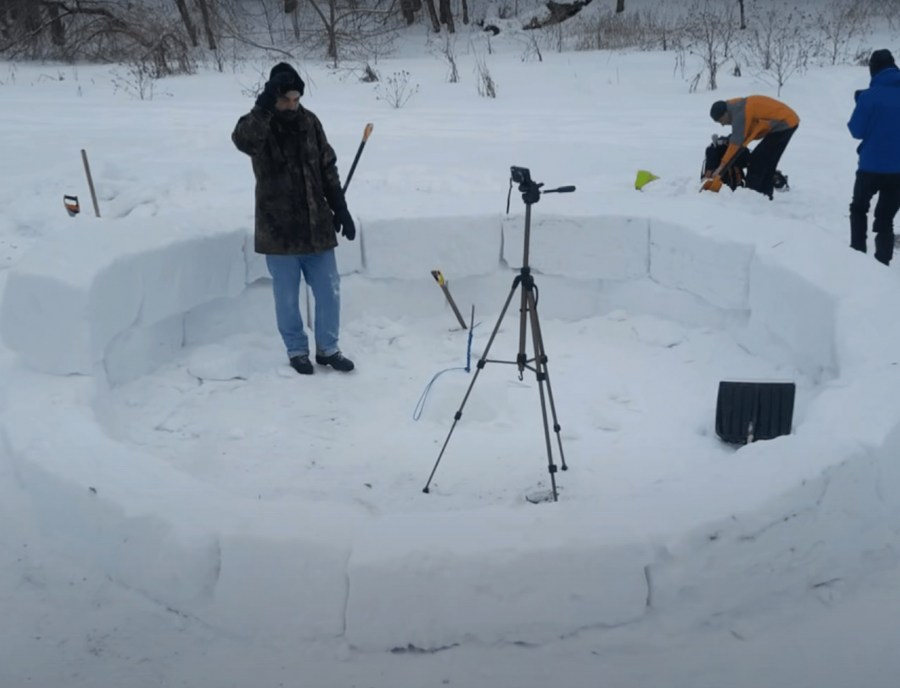 You also need to make a bevel. The entire bottom ring should not be even. In the correct snow house, it goes up a little. This is necessary so that the subsequent rows fold in a spiral with a narrowing upward, which forms a dome. 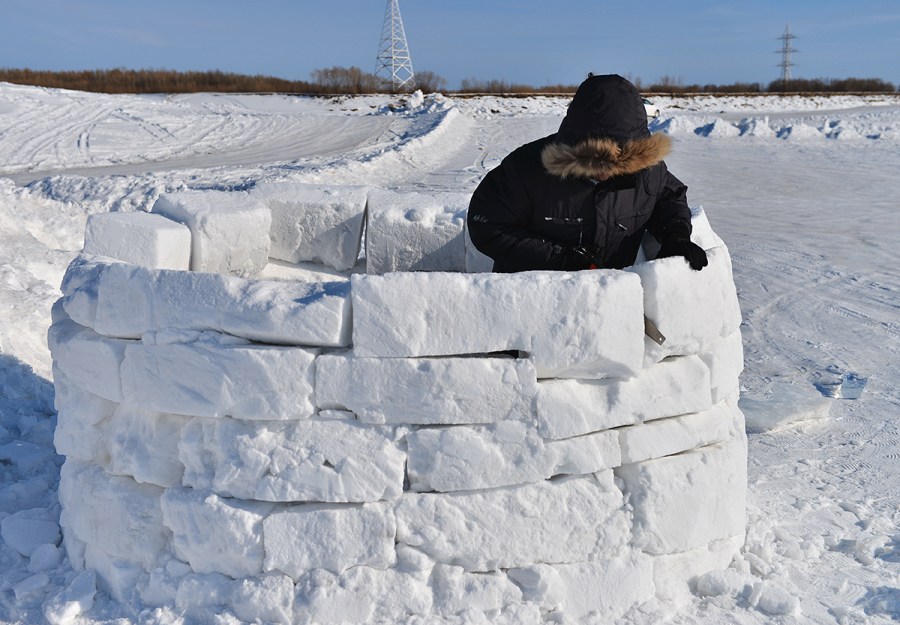 Each subsequent tier should be closer to the center. To do this, we slightly reduce the blocks in size on each subsequent ring. We make the bevel not steep, but neat. The sharp transition will collapse the walls before the end of the construction. Any gaps that will form are simply clogged with snow. We cut the corners of the blocks inside and outside to reduce the mass. 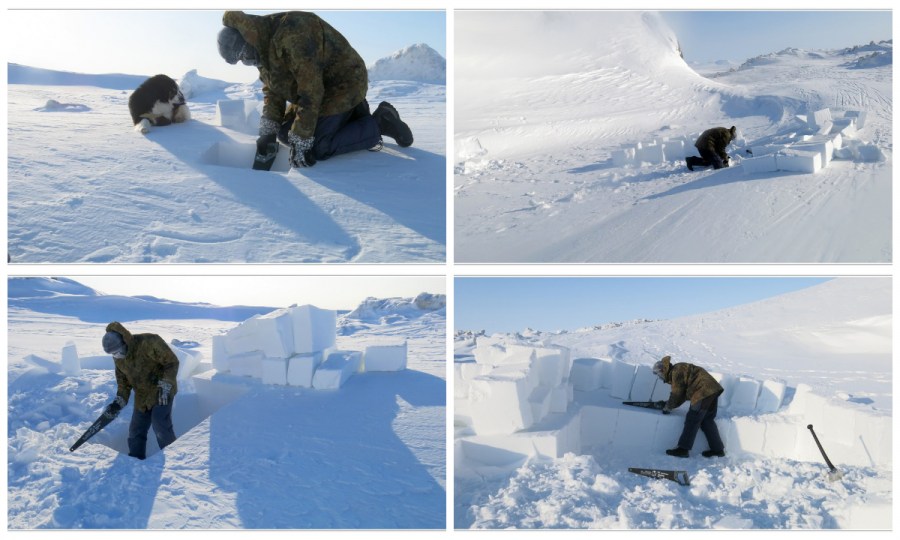 After the igloo was built, the only thing left was to build the upper tier, that is, the roof must be prepared. It is also done, but incorrect installation can fill up the house. Here you need to achieve the most snug fit with a knife. 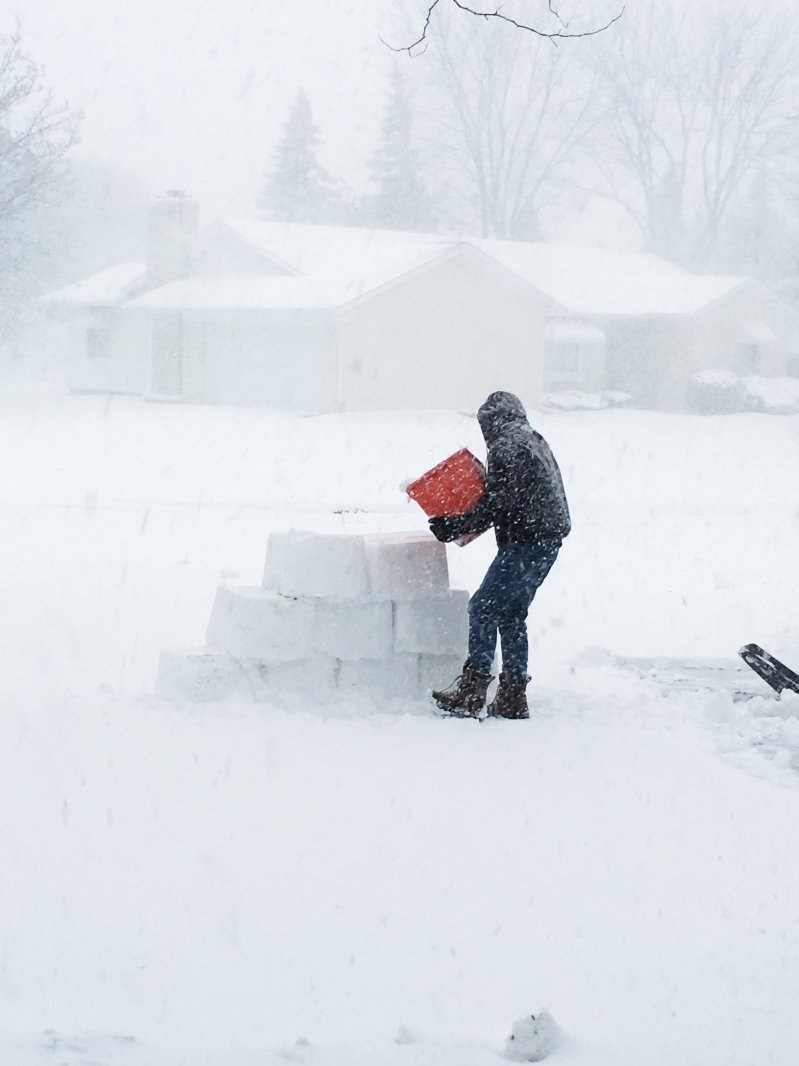 At the end, there will be a hole in the middle. We push the last block onto the roof and cut it out along the contour with a knife so that it joins the walls.

It remains only to finish the needle. Since you can not only stay in it during the day, but also sleep, we need a ventilation system. The human body produces heat, which will slightly melt the inner walls of the house. They will be covered with ice and will not be able to let air in or out. On the one hand, this is good, we are not afraid of drafts. On the other hand, there will be almost no air circulation. 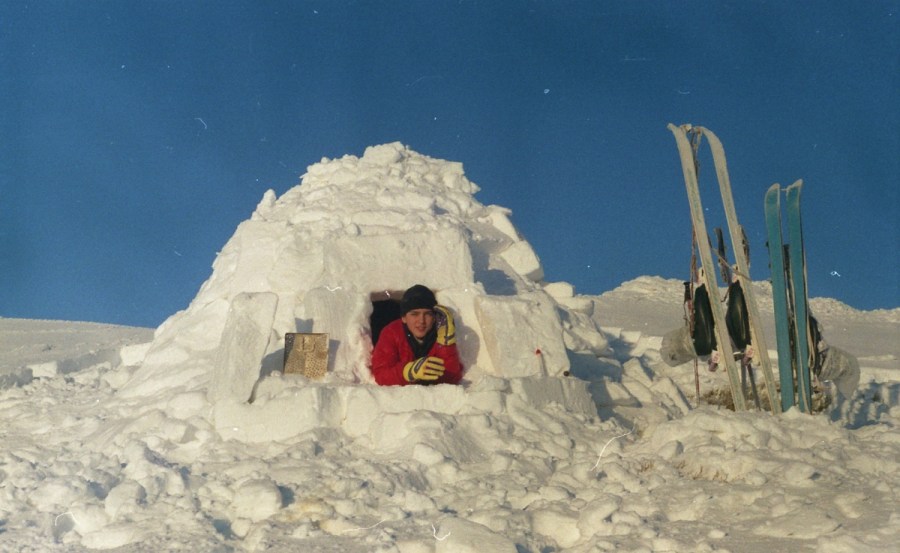 Our lungs release carbon dioxide, and in a small space, it will quickly fill the needle. Considering that excess CO2 causes severe drowsiness, you can freeze.

Carbon dioxide is heavier than air, so it always sinks to the ground. In the second ring, make small holes around the entire circumference. They will not let in a strong draft, but will increase the circulated air. 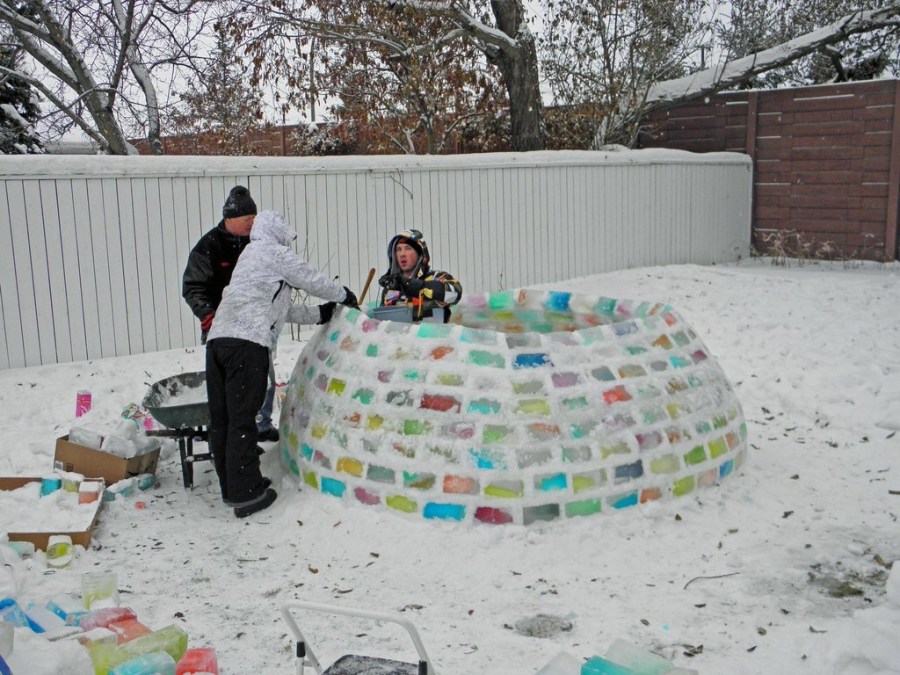 If the blocks are well bonded, you need to cut the exit. With a knife or saw, carefully draw a rectangular door. This will be the entrance, and the piece left after will be the door. At night, they can close the hole so as not to freeze.

The path to the entrance needs to be cleared. This is especially important if the house is going to spend the night in the forest. Snowfall can completely cover the entrance, after which it will not be possible to get out of the igloo. And what can be done from the snow left after clearing? They can seal the joints. 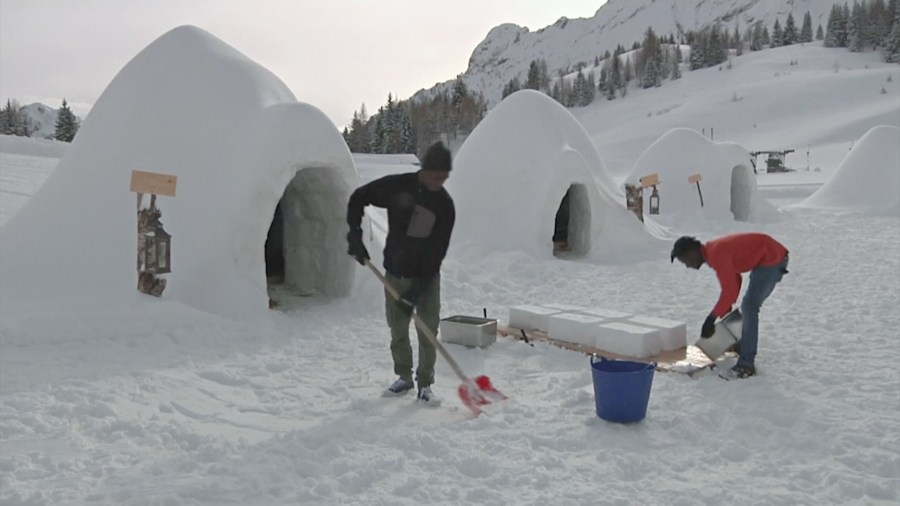 Most likely, you won’t be able to make a needle without any gaps. Therefore, we simply cover any open joints with snow. This should be done without pressure, so as not to knock down the blocks. In addition, it increases the strength of the house after freezing. 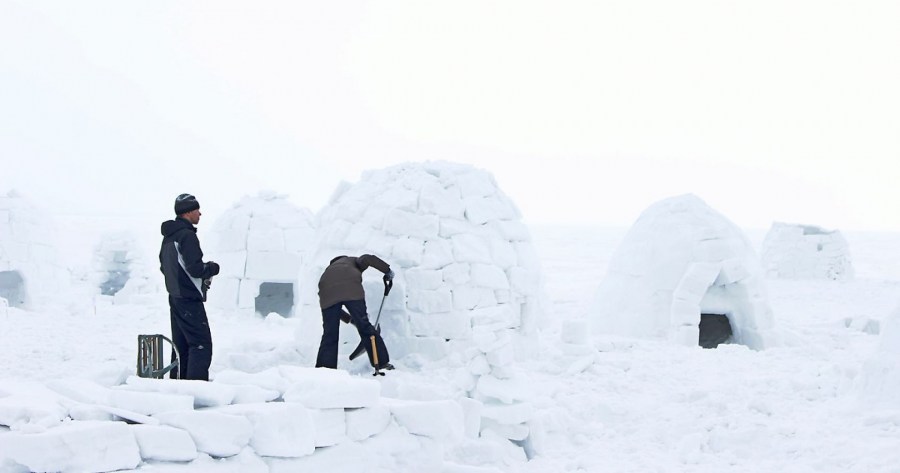 It is easy to check the strength of the needle – just push it lightly. If it is monolithic and the block does not move at all, you can live in it. By the way, even in the event of a collapse, it will be easy to get out of it.

You can watch a video on how to build an igloo at home below.