TrendyIdeas.net | Your number one source for daily Trending Ideas
Home Design A selection of trees with a weeping crown for a decorative garden 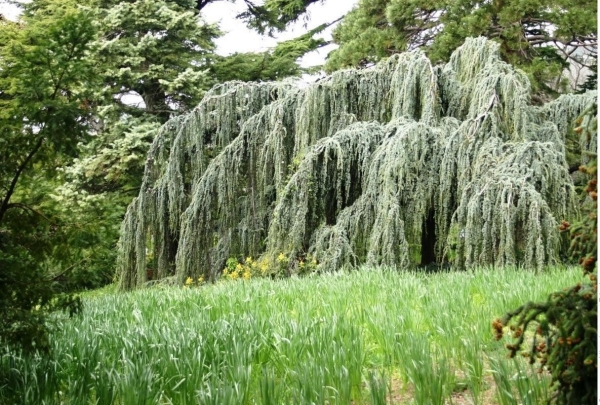 Weeping trees are trees in which branches and leaves fall down, creating a graceful flowing profile. In nature, such species are rare. Most of the modern decorative forms of trees and shrubs with drooping crown are the result of selection.

Weeping trees are a great choice for small gardens. They are smaller than their species relatives, so it is easier for them to find a place on the site. Usually trees are planted to draw attention to a beautiful silhouette – on the lawn, at the entrance to the site, on the shore of the reservoir. Such trees look harmoniously in compositions of plants with different crown shapes – columnar, spherical, umbellate.

Many plant species have a weeping crown shape. In our selection of eight deciduous trees that can decorate any garden.

Trees with a weeping crown in botany are designated by the term pendula, which translates from Latin as “hanging down”

Unlike the species silver birch, which grows up to 20 m in height, the decorative form of B. pendula Youngii is a dwarf tree. Its height is determined by the graft, but it rarely exceeds 4–6 m. The plant grows about 70 cm per year.

Yungi birch is distinguished by an openwork weeping crown, resembling an umbrella from a distance. Skeletal branches are spreading, curved downward, often of a bizarre shape, terminal shoots are thin, drooping. Pointed leaves, green in summer and golden yellow in autumn, make the crown thick and picturesque.

The plant begins to bear fruit at about the 10th year of life, throwing out many small winged nuts by the end of each summer. Do not be afraid that the birch will multiply quickly, since not all seeds will sprout, and the germinated seedlings are easily pulled out. In addition, you may be lucky, and you will acquire a male specimen that does not give offspring.

The native region of the miniature tree is Europe, so it is well adapted to our climate and easily tolerates winter. Birch prefers full sun. It is undemanding to soils, but it will grow better on light fertile loams. Only young specimens need watering, an adult tree usually has enough atmospheric precipitation. The crown does not need to be formed, sanitary pruning in the spring is enough. 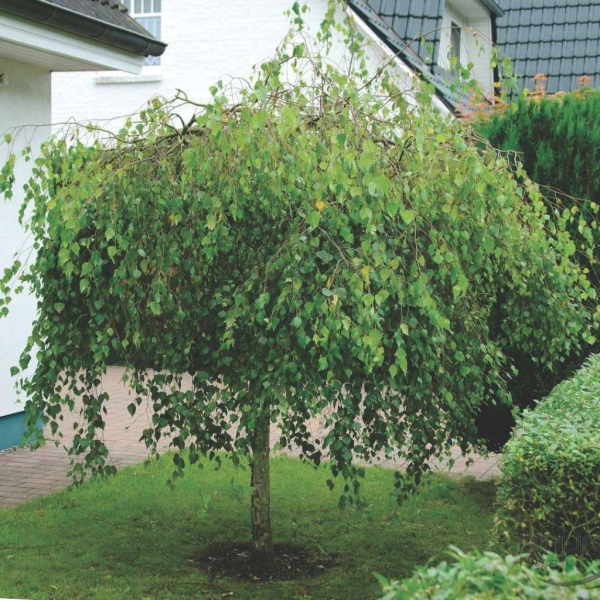 The common hornbeam Pendula belongs to the birch family and really resembles a weeping birch tree. He is the same slender, flexible, graceful, with thin shoots, almost touching the ground.

C. betulus Рendula is an ornamental form grafted onto a dwarf bole. The tree grows slowly, rarely exceeding 3–4 m in height. It has a thin, straight trunk with a silvery-gray bark and a rounded crown with pointed smoky green leaves.

Hornbeam belongs to frost-resistant tree species, unpretentious to growing conditions. It will grow in the shade, it loves moderately fertile structured soil, it tolerates drought well, and is almost not damaged by pests. It has a powerful root system that perfectly strengthens the soil, which makes the plant valuable in areas with relief changes.

Unlike birch, which does not like cutting, the weeping hornbeam tolerates pruning well, so its crown is easy to shape. The tree does not flower or bear fruit.

In the garden, hornbeam is used in specimen plantings and as part of the composition, especially in combination with conifers. Its crown remains decorative even in winter. 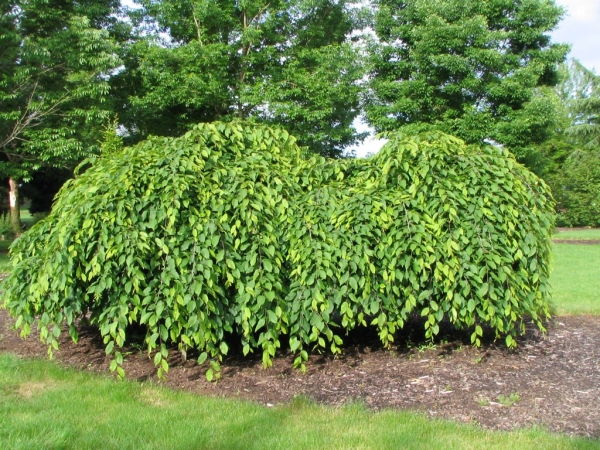 Like the two previous plants, the Japanese scarlet Pendulum is a decorative form obtained by grafting onto a short stem. It was brought to the USA, and from there the culture spread throughout Europe.

C. japonicum Рendulum is a tree up to 6 m high with a thin trunk and a picturesque cascading crown. The main decoration of the scarlet is large heart-shaped leaves, which acquire a golden-purple color in the fall. And at this time, the foliage begins to exude the sweet aroma of caramel and bread, for which in Europe the tree was called gingerbread.

Weeping scarlet loves well-lit places, but young plants are prone to sunburn, so it is advisable to shade them in the spring. The soil prefers fertile, slightly acidic, moist, well-drained. Poorly tolerates flooding by groundwater. During dry periods, the plant should be watered 2-3 times a week.

The decorative form is less frost-resistant in comparison with the species tree, therefore, it is advisable to cover the trunk circle and the grafting site for the winter. 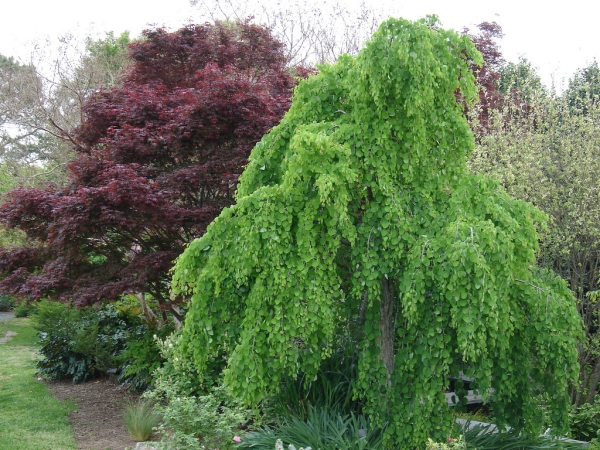 The Japanese scarlet has a peculiarity – the more acidic the soil, the richer the crimson color of the leaves in autumn

The botanical name for the decorative form of beech is Fagus sylvatica Purpurea Рendula. It is a short tree (3–5 m) with long drooping branches growing almost vertically downward and beautiful purple leaves with a glossy sheen.

The purple-leaved weeping beech is prone to tillering, so side shoots must be removed regularly to form a central trunk. The tree grows slowly – 10-15 cm per year.

Choose a well-lit and ventilated area for planting. The plant loves moist and fertile clay soil. It reacts negatively to excessive soil compaction, so it is better to turf or mulch around the trunk.

In landscape design, it is used as a specimen or as an accent in compositions of several trees and shrubs. 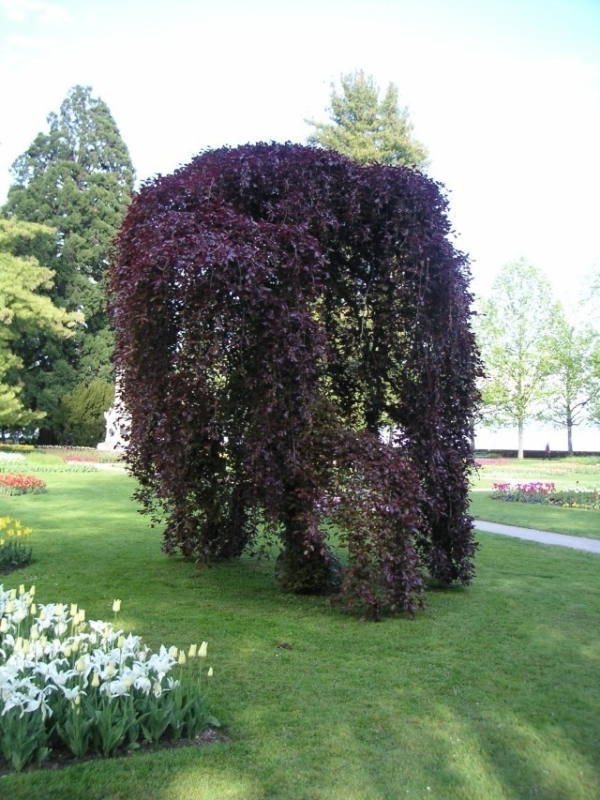 Such foliage will not be lost even against the background of flowering plants.

Common ash is a tree common in the European part of Russia that grows in nature up to 30 m high and lives up to 300 years. For gardeners, its weeping form – F. excelsior Рendula is of interest. It is no less tenacious, but not so high – about 8 m.

The tree has a beautiful dome-shaped crown with long shoots hanging almost to the ground. They lend themselves well to cutting and grow back quickly. In autumn, the branches, in addition to yellow leaves, are decorated with lionfish fruits. The crown of an adult tree can reach 8-10 m in diameter, so this representative of the weeping flora is more suitable for spacious gardens and parks.

The most suitable exposure for ash is full sun. It is quite picky about the soil and will grow well on moist fertile loams and chernozems. During dry periods, the plant needs to be watered. Ash hibernates without problems, but even if the shoots freeze, it quickly recovers.

In ornamental gardening, weeping ash is used in alleys, in the shade of its picturesque crown, recreation areas with benches are arranged. 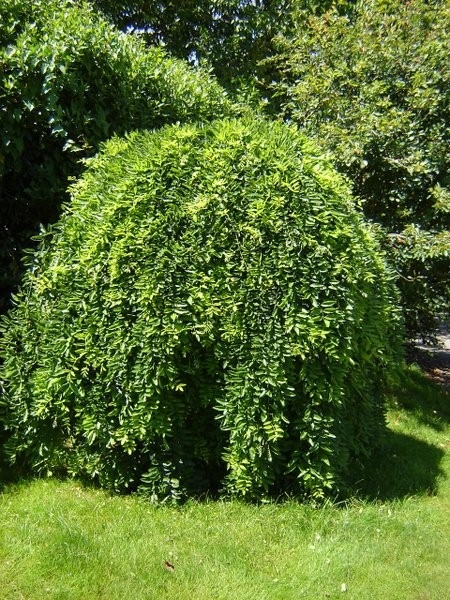 Due to the branches located opposite each other, ash forms a symmetrical weeping crown

Weeping mountain ash (S. aucuparia Рendula) is a small tree, the height of which depends on the stem and varies from 2 to 6 m. It has a rather original crown – drooping shoots, but not flexible, but rather bizarrely curved. This branch architecture enhances the decorative value of the tree in winter.

And in general, Pendula’s mountain ash is beautiful all year round: in spring, white flowers, collected in large shields, come to the fore, in summer – large carved leaves, in autumn – orange clusters of berries.

The plant loves the sun, but tolerates a little shading. The soil prefers fertile, loose, moderately moist. This is important, since mountain ash does not tolerate drought and waterlogging. He also does not like alkaline soil, from which it may even die. But it tolerates the cold well and rarely freezes even in severe windy winters. 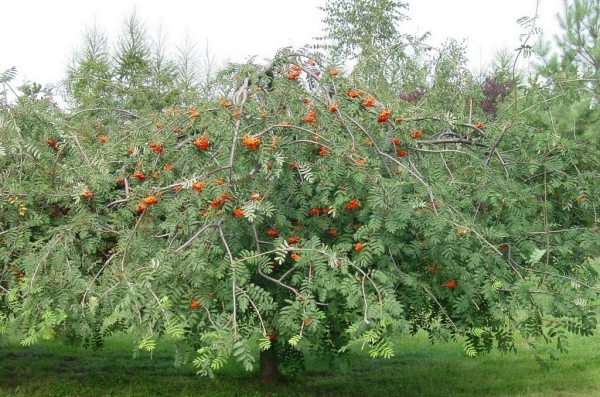 The rough Camperdownie elm from the elm family is one of the most beautiful trees with a rounded umbrella crown. Very often, its diameter exceeds the height of the trunk, making the tree look like a mushroom or an inverted bowl. If the shoots are not shortened, then it forms a dense canopy, resembling a hut.

The leaves of the weeping elm are large, dark green, rough to the touch. Shoots are long, grow horizontally at first, and then droop. To get a thicker and wider crown, branches need to be trimmed periodically. The tree blooms with small purple inflorescences before the leaves bloom, in the place of which tufts of lionfish are formed.

One of the advantages of Camperdowney is its high ductility. The tree can grow in any climate, as it tolerates cold and heat, drought and high humidity, sun and partial shade equally well. Except that he does not like the swamp, preferring dry places.

The Camperdowney elm makes excellent tapeworms. And if you put it on the playground and let it turn into a thick tent, there will be no limit to the delight of the kids. 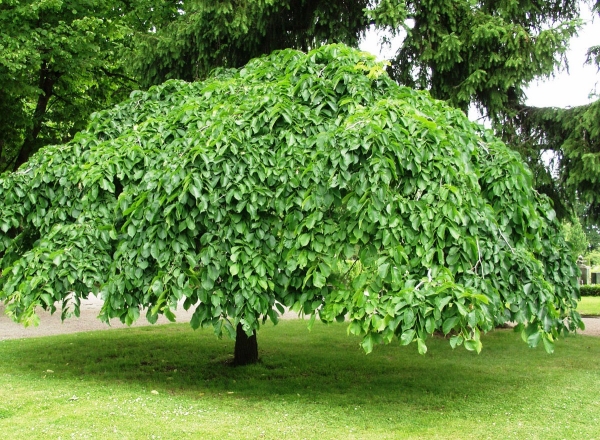 Thanks to the unusual umbrella crown, the Camperdowney elm is beautiful and recognizable at any time of the year

If you want a weeping tree that blooms beautifully in spring, the shaggy Pendula Rubra plum is an excellent choice. The plant belongs to the elm family and is a standard tree 2–4 m high with a drooping crown up to 5 m in diameter.

P. subhirtella Pendula Rubra is very popular in Japan, and if you have a Japanese-style corner in your garden, the tree will come in handy there. In April – May, the plant is covered with an abundant pale pink color, which looks even more dazzling thanks to the cascading branches.

The miniature weeping tree loves sunny places and well-moistened nutritious loamy and sandy loamy soils. In arid regions, the plant needs watering, although it has a negative attitude towards waterlogging. Plum Pendula Rubra is considered winter-hardy, but to prevent the flower buds from freezing, plant it in secluded places protected from the wind. 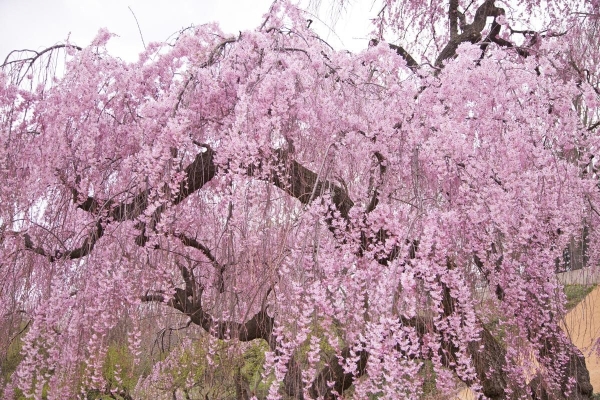 Other trees, including conifers, have weeping crowns, but we will talk about this another time. We will be glad if our selection will help you replenish your collection of garden plants with new acquisitions and make your garden even more beautiful.